The Blair Big Band is joined by acclaimed saxophonist and educator Roxy Coss, a Juilliard faculty member and and founder of the international association for women in Jazz (WIJO).

A musician, composer, bandleader, recording artist, educator and activist, Coss has become one of the most unusual and innovative saxophonists on the scene. Winner of a 2016 ASCAP Herb Alpert Young Jazz Composer Award, the Downbeat Critics’ Poll listed her as a “Rising Star” on soprano saxophone the past five years in a row, and a Downbeat Magazine review called her “An exceptional young talent.”

Originally from Seattle, Coss has been a fixture on the New York scene for more than 10 years. She has headlined extensively around the world, including major festivals and venues such as the Newport Jazz Festival, Melbourne Big Band Festival, Earshot Jazz Festival, San Jose Jazz Summerfest, Ballard Jazz Festival, The Jazz Standard, and Jazz Showcase, among others. Her band, the Roxy Coss Quintet, has held residencies at New York City clubs including SMOKE Jazz Club and Club Bonafide, appears frequently around New York, and tours nationally. She was also a featured guest musician on the television show Harry in 2017. She is the founder of Women In Jazz Organization (WIJO), and serves on the board of directors of Jazz Education Network (JEN). Roxy is also on the jazz faculty at The Juilliard School, The New School, and the Borough of Manhattan Community College (a CUNY school). 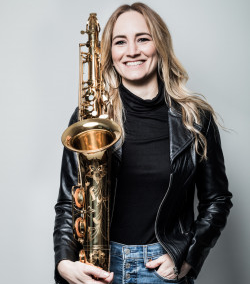