Choro das 3 is a Brazilian instrumental group of three sisters and their father that first started to play as a band in 2002. Corina plays flute and piccolo. Lia plays 7-string guitar. Elisa plays mandolin, banjo, clarinet and piano. Their father, Eduardo, plays pandeiro (the Brazilian tambourine).

Choro das 3’s mission is to revive the Choro tradition in Brazil, where they join several other young people in rediscovering this music, and to spread Choro around the world.

Choro (pronounced “Shoro”) is a musical form that predates samba and bossa nova. Choro is fusion of European melody and harmony with Afro-Brazilian rhythms. Choro has many parallels to jazz, including virtuoso technique, rhythmic intensity, and group interaction. Like great jazz, Choro is full of joy and is deeply grooving.

The group has recorded three CD’s and has played for millions of people, including Brazil’s Presidents, Governors and Ministers; several TV and Radio Shows; soccer stadiums; plus concerts and workshops in France and in the United States.

Choro das 3 has made annual tours of the U.S. and in previous years has performed in the NJW’s Jazz Cave. This year’s concert is hosted by our friends at the Global Education Center. We hope that all their Nashville fans will come out for this, as it will be a great concert! 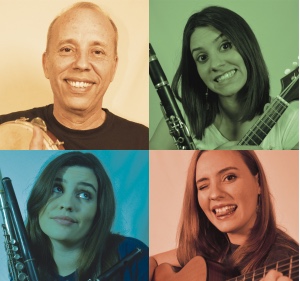