Cord Martin is one of the finest saxophonists in the area who you may never have heard, as he spends most of his time mentoring young musicians in Middle Tennessee! A distinguished educator in Columbia, Tennessee, where he has earned honors as “Teacher of the Year,” he has also led the Ethos Jazz Ensemble, where he was responsible for bringing jazz notables Don Braden and Valery Pomonarev to the area for concerts at the Cave and to work with the ensemble.

Cord has performed in the former Jazz Cave, both as a sideman and a leader, turning in an outstanding 2017 concert in our previous venue. Steeped in the tradition and with a contemporary flavor, Cord’s playing has something for everyone, as you can hear in the concert excerpts below: a Michael Brecker-inspired “Autumn Leaves” and and marvelous soprano sax rendition of Kenny Barron’s “Sunshower.”

Now Cord returns to NJW for a set of contemporary jazz, leading a quintet of outstanding players. This is a concert not to be missed!

More About Cord: Corderyl J. Martin, saxophonist, composer and educator serves as Co-Director of Bands at Whitthorne Middle School in Columbia, Tennessee. He also served as conductor of the Ethos Jazz Ensemble, an audition-based youth jazz ensemble in the Middle Tennessee area.

At age nine, Martin, a native of Columbia, Tennessee, began formal musical studies on the piano. By the time he reached junior high, he made the transition to saxophone and began to investigate the mechanics and language of improvisational music.

He continues to perform and record in the Nashville area on a regular basis. He has had an opportunity to perform alongside renowned artists and groups such as “The Queen of Soul” Aretha Franklin, The Cab Calloway Orchestra, saxophonists Don Braden and Greg Osby, trumpeters Tom Harrell, and Valery Pomonarev, and Rick Braun, Grammy-nominated saxophonist Jeff Coffin, legendary alto saxophonist Lee Konitz, and Grammy-winning keyboardist Ben Tankard. 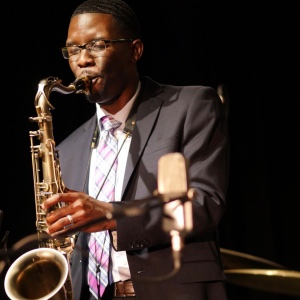