While we’re all practicing social distancing and live performances are on hold, here’s a gift from the Nashville Jazz Workshop. Jazz From Home is a curated series of live performances from some of the city’s finest established and emerging jazz artists. The series will feature some names you know and some you don’t know, with a variety of music limited only by the ingenuity of the artist.

The next program in the series features a solo performance from Vail Johnson in a 45-minute concert recorded live in his home. The concert will be streamed on YouTube Live. Join us on YouTube Wednesday, April 8 at 7pm for this great concert! 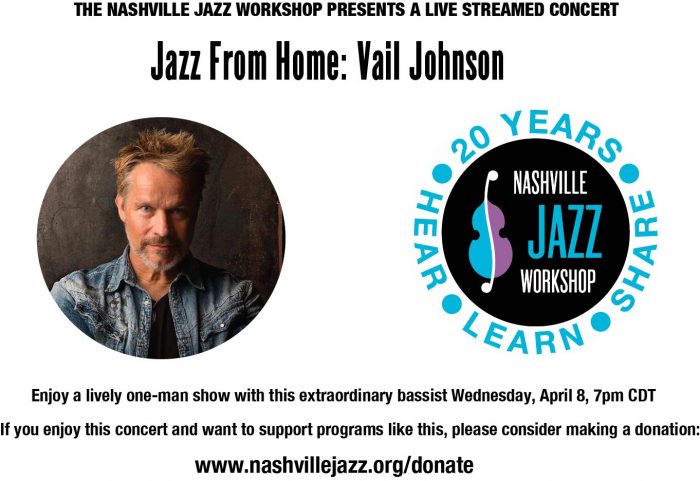 The Seventh Son in a family of musicians, Vail was blessed with wildly diverse influences. His professional career began straight out of high school headfirst into the club circuit around Seattle, west coast region, then national to international travel with dozens of different bands.
Connecting with Kenny G in Seattle early1986 set Vail on a unimaginable ride that continues to this day. Never content to be ‘just a sideman’ he continually developed his band leader and vocal skills with 6 solo CD’s which brings us to the present;
The New Project……….’Around the World in 40 Years’ Music and Musings from a Remarkable Career
Vail’s new ‘one-man’ show integrates music and stories from world- wide performances and experiences not just with Kenny G (33 years and counting) but luminaries such as Herbie Hancock, Stevie Nicks, Keb’ Mo’, George Benson, Michael Bolton, James Ingram, Gil Scott Heron, MC Hammer, Steve Perry, The Arsenio Hall Show and David Cassidy as well as lesser known but highly respected artists like Eric Marienthal and Frank Gambale (both members of the Chick Corea Electrik Band) Patti Austin, Warren Hill, Young MC, Edgar Winter, Freddie Ravel, Carmine Appice, etc., etc., etc
With just a bass, a microphone and a looper ( a la Ed Sheeran) Vail electrifies audiences with joyfulness and mastery of the instrument unparalleled; there’s a story behind every song, bringing unique perspective into the life of a world touring artist. Equal parts entertainment, inspiration and education, his show is available as a stand- alone concert performance for all audiences as well as a clinic/ seminar style suitable for music schools.