Jazz on the Move Redux: Miles Davis “Kind of Blue”

For 14 years, the Nashville Jazz Workshop and the Frist Art Museum have partnered to present Jazz on the Move, a series of Sunday afternoon concerts featuring the life and music of significant jazz performers. The onset of the COVID-19 pandemic caused the cancellation of the two remaining Frist Museum performances this year, but the Nashville Jazz Workshop plans to stream past JOTM concerts that took place at the Frist. The series continues Sunday, July 19 at 3:00 p.m. CDT, with a YouTube stream of the 2019 concert, Miles Davis “Kind of Blue” featuring Rahsaan Barber.

The program will be streamed on the Nashville Jazz Workshop’s YouTube channel, Watch here. 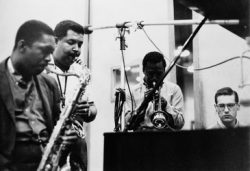 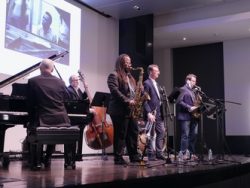 Miles Davis – trumpeter, bandleader, and composer – is widely considered to be one of the most influential musicians of the 20th century. Davis was at the forefront of some major developments in jazz music, including bebop, cool jazz, hard bop, modal jazz, and jazz fusion. Davis’ legendary musical groups elevated the careers of artists such as John Coltrane, Bill Evans, and Herbie Hancock among many others.
Miles Davis’s album “Kind of Blue” was released by Columbia Records in August 1959. Featuring pianist Bill Evans, saxophonists Cannonball Adderly and John Coltrane, bassist Paul Chambers, and drummer Jimmy Cobb, the album was certified quadruple platinum by the Recording Industry Association of America (RIAA) in 2008. It is regarded by many as Davis’s masterpiece recording. Rolling Stone magazine ranked the album #12 on its 2003 list of the 500 greatest albums of all time.
Nashville saxophonist Rahsaan Barber presented the afternoon’s program along with trumpeter Jamey Simmons, saxophonist Evan Cobb, Pianist Bruce Dudley, bassist Roger Spencer, and drummer Derrek Phillips.

Coming up in the series: The Life and Music of Nina Simone with Dara Tucker

The Jazz on the Move series is made possible through generous support from: The Community Foundation of Middle Tennessee, Caterpillar Financial Services, Anne and Peter Neff, The Carolyn Kulkin Fund for Education and Community, and Arkiv Jazz.