Jazz on the Move Redux: The Life and Music of Nina Simone

For 14 years, the Nashville Jazz Workshop and the Frist Art Museum have partnered to present Jazz on the Move, a series of Sunday afternoon concerts featuring the life and music of significant jazz performers. The onset of the COVID-19 pandemic caused the cancellation of the two remaining Frist Museum performances this year, but the Nashville Jazz Workshop plans to stream past JOTM concerts that took place at the Frist. The series continues Sunday, August 23 at 3:00 p.m. CDT, with a YouTube stream of the 2019 concert, The Life and Music of Nina Simone featuring Dara Tucker.

The program will be streamed on the Nashville Jazz Workshop’s YouTube channel, Watch here. 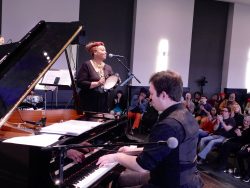 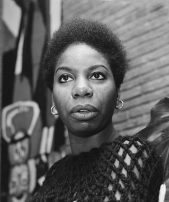 Nina Simone was a multi-talented artist whose music spanned jazz, classical, blues, R&B, gospel, and pop. A gifted musician from an early age, she studied at Julliard before embarking on a career as a jazz singer. She recorded more than 40 albums between 1958 and 1974. She is most remembered today for her Civil Rights activism and protest music during the 1960’s and 70’s, which inspired many and also made her a controversial figure at the time. In her later years her musical output was uneven and her personal life erratic. Nevertheless, Nina Simone remains one of the most brilliant, challenging, and fascinating figures to grace the jazz scene.
Dara Tucker has been one of the most popular and versatile vocalists on Nashville’s jazz scene before her move to New York earlier this year. She records extensively, tours nationally and internationally, and somehow has found time to teach Master Classes at the Nashville Jazz Workshop. Dara has also led Jazz on the Move performances on Nancy Wilson and Betty Carter, and teaches vocal classes as well as listening/appreciation classes at the Jazz Workshop.
The concert was originally presented in March 2019 to a standing room-only crowd. The upcoming stream is a chance for fans to relive the original performance or to see and hear it again if they missed it the first time.

The Jazz on the Move series is made possible through generous support from: The Community Foundation of Middle Tennessee, Caterpillar Financial Services, Anne and Peter Neff, The Carolyn Kulkin Fund for Education and Community, and Arkiv Jazz.