Jazz on the Triangle

The annual series Jazz on the Triangle returns to the Church of the Holy Trinity for the twenty-fourth season this year.  Concerts will be the April 28, May 19, and June 16, featuring some of Nashville’s finest and most respected talent.

The season opens on April 28 with Sonja Porter Hopkins. Nashville-based songwriter and jazz vocalist Hopkins has a vocal texture that encompasses high spirited tones of nostalgic jazz. She has been singing since childhood growing up in Mobile, Alabama. She began her journey, as have many accomplished artists, in a small church.

Thomas Cain returns to Holy Trinity this year as our  “Gentleman of Jazz,” and what a gentleman he is. Known by many as the Senior Director, Writer/Publisher Relations for BMI, Thomas Cain is first and foremost a great musician. He plays piano, organ and trumpet; he has a Bachelor’s degree in music education from TSU.

He’s a singer, publisher, producer and songwriter, in addition to having opened shows for artists such as Ray Charles, George Benson, Bill Withers, Ramsey Lewis, Donny Hathaway, Dave Brubeck, Melba Moore and Johnny Mathis. In 1991, Thomas was honored with the Choice award and in 1999 he was inducted into the Alabama Music Hall of Fame. He’s written and or performed on jingles for national products, and he performs with his group, The Thomas Cain Band.

Cain received the HAL  (Heroes and Legends) Cornerstone Award in 2008. The following year, he performed at Lincoln Center in New York City for the National Endowment for the Art’s Jazz Masters Live series. Also in 2009, he was honored as part of the 105 Voices of History HBCU celebration at the Kennedy Center for the Performing Arts in Washington, D.C. In 2012, Cain retired from his 29-year stint at BMI/Nashville and joined the music faculty at Tennessee State University to teach music publishing. Cain continues in his career as a songwriter, musician, and music publisher helping to manage songs as the intellectual property of creative artists in Nashville. He remains an active performer and studio musician in addition to his publishing work.

Paula James Chavis will close our season in grand style with a sort of homecoming. She began singing at age 4 right here at Holy Trinity, and continued to sing at St. Vincent de Paul School, and on into Junior High, High School, and College. Her idols are many and varied – Sarah Vaughan, Nancy Wilson, Aretha Franklin, Etta James, and others. She has synthesized her own style and voice while absorbing influences from many of the greats of the vocal field. Paula was for 33 years a triple career woman – raising three children, teaching First Grade for the Metropolitan Nashville School System, and singing and performing on stage and screen. She has performed with Dr. Dorothy Marcic, acclaimed author of “Respect,” has backed up such varied artists as Shirley Caesar, Charlie Daniels, Amy Grant, and Kenny Rogers. This will be an extraordinary concert, and a fitting close to our twenty-fourth season.

Come celebrate Father’s Day with us – bring Dad, Granddad, or that person who has helped you be a Dad or been an auxiliary Dad to you.  But do come.

The Church of the Holy Trinity is located at 615 Sixth Avenue South, the intersection of Sixth Avenue and Lafayette Street.  The Gothic styled building is known for its fine and intimate acoustics. Tickets may be had for $20 each, or $50 for the series of three.  Each concert will begin at 4:00 pm, will include a short intermission, and will be followed by a reception in the Church’s Parish Hall.  For further information, contact the Church at (615) 256-6359 or email cotht@att.net. 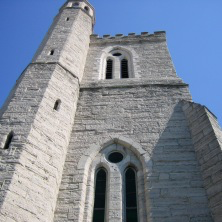