John Fedchock with the Pat Coil Trio In Concert

John Fedchock with the Pat Coil Trio In Concert at the Jazz Cave at the Nashville Jazz Workshop on Saturday, August 27th, 2022. Bandleader and trombonist John Fedchock is joined by Pat Coil (piano), Roger Spencer (bass), and Danny Gottlieb (drums).

John Fedchock’s illustrious career in jazz has spanned over four decades. Since his emergence on the scene in 1980, Fedchock has established himself as a world-class trombone soloist, a heralded bandleader, and a Grammy-nominated arranger. An in-demand performer and writer in New York City, his multifaceted talents have led him to become one of NYC’s premier jazz artists. His critically acclaimed John Fedchock New York Big Band has become a marquee group, showcasing Fedchock’s trombone and arranging as well as the band’s all-star soloists. The JFNYBB’s five CDs on the MAMA and Reservoir Music labels have all received high praise from critics and extraordinary success on national jazz radio charts. The early success of the band resulted in Fedchock’s name appearing in DOWNBEAT’s Readers Poll under the categories of Trombone, Arranger and Big Band, simultaneously for several consecutive years. In recognition of his formidable arranging skills, Fedchock is a two-time GRAMMY Award nominee for “Best Instrumental Arrangement”. The JFNYBB’s recordings have appeared in jazz radio’s Top Ten, and the New York Times has applauded the band’s “Cheerful Syncopation, Served With Spit-and-Polish Precision.” Small group projects with his quartet and NY Sextet showcase A-list sidemen along with Fedchock’s “incomparable trombone playing, which seems to have no limit, technically or musically” (JazzReview.com). 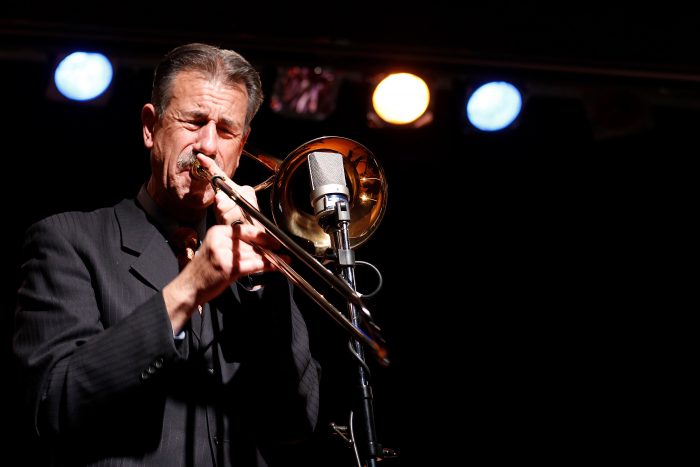