Our friends at the Tennessee Jazz and Blues Society present the next installment in their Great Albums Concert series Sunday, November 3 at 7pm. The concert showcases the classic Hank Mobley recording “Soul Station” and is presented by the Rahsaan Barber Quartet featuring Bruce Dudley, John Birdsong, and Chester Thompson.

“Soul Station” was released in 1960 at the height of the classic Blue Note era, and is one of the finest examples of that period and style. It’s considered a definitive Hank Mobley recording, the equivalent of “Saxophone Colossus” for Sonny Rollins or “Giant Steps” for John Coltrane.  Hank Mobley was described by critic Leonard Feather as “the middleweight champion of the tenor sax” because his tone was neither as aggressive as Sonny Rollins nor as mellow as Stan Getz. Although somewhat underrated at the time, Mobley is now considered by jazz players to be one of the finest talents of the era and one of the most satisfying players to listen to.

The Rudy Van Gelder recording includes two standards and four originals, including the classic “This I Dig of You.” Besides Mobley, the recording featured Wynton Kelly on piano, and Paul Chambers on bass, and Art Blakey on drums.

The concert begins at 7pm in the Upstairs Lounge at the City Winery, with doors opening at 5pm. Tickets are available on the City Winery website and are $20, $15 for TJBS members with discount code (will be emailed to members). 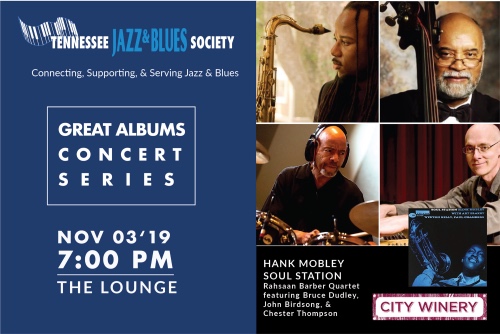 $20, $15 for TJBS Members
Get Tickets
TRANSLATE