Initially released in 1958, “Misterioso” was recorded live during Monk’s residency at New York City’s premier jazz club The Five Spot. Riverside Records’ Orrin Keepnews decided to record an album there because he felt Monk’s playing was more exuberant and forceful in that setting than the studio, and that the enthusiastic audience response would elicit equally strong group performances. The album also debuted an essentially new quartet, with tenor saxophonist Johnny Griffin, drummer Roy Haynes, and from Monk’s previous quartet, bassist Ahmed Abdul-Malik.

“Misterioso” was also a showcase for Monk’s compositions, with five of the six tunes being his originals. In addition to the title track, the album includes the Monk classics “In Walked Bud,” “Let’s Cool One,” “Evidence,”Round Midnight,” and “Nutty,”

About the artist: California native David Rodgers is one of the most exciting young talents in Nashville’s jazz scene today. Currently an active member of Keb’ Mo’s band as keyboardist and musical director, he has also toured or performed with musicians including Taj Mahal, Kirk Whalum, and Jeff Coffin worldwide at the Montreux Jazz Festival, North Sea Jazz Festival, and the Playboy Jazz Festival, among many others. David is a graduate of Vanderbilt University’s Blair School of Music where he pursued both classical and jazz piano performance and is currently pursuing a master’s degree in commercial composition and arranging at Belmont University. 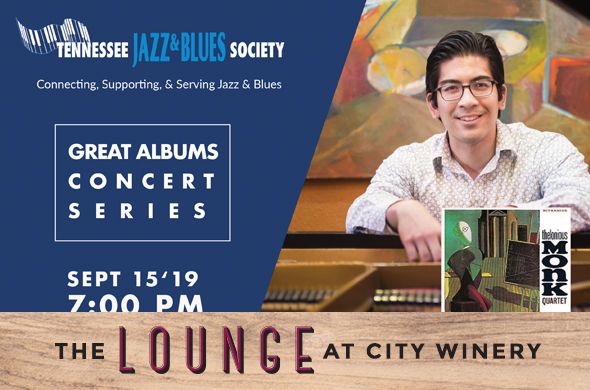 $20, $15 for TJBS members
Get Tickets
TRANSLATE