The Tennessee Jazz & Blues Society Great Albums concert series continues with “Time Out” by Dave Brubeck performed by the Bruce Dudley Quartet, Sunday, June 9, 2019, in The Lounge at City Winery Nashville. Doors open at 5 pm and the show begins at 7:00 pm. Tickets are $20 for general admission and $15 for TJBS Members. Members will receive the discount code via email prior to the show. Tickets can be purchased from City Winery’s website.

Special thanks to Steinway Piano Gallery for providing an acoustic piano for Bruce to play during the evening.

Time Out is considered one of the most rhythmically innovative albums in jazz history. It is one of the first to explore time signatures outside of the standard 4/4 beat or 3/4 waltz time. This risky move almost led to Dave Brubeck’s record company not releasing such an arty project. Initially, many critics insulted Brubeck for tampering with jazz’s rhythmic foundation but the public received the album with much more optimism than that of the critics. Time Out became an unexpectedly huge success and still ranks as one of the most popular jazz albums of all time. This is a testament to Brubeck and Paul Desmond’s abilities as composers because Time Out is full of challenges both subtle and overt – it’s just that they’re not jarring.

The Lounge at City Winery has comfortable seating and great acoustics where patrons can enjoy great dinner selections and cocktail options while seeing the show. Tickets are $20, $15 for TJBS members (members will receive a discount code via email). 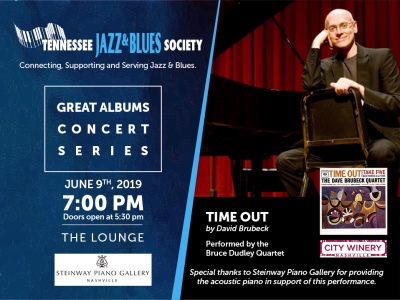