Andy Reiss grew up in San Francisco, Calif., playing in a wide variety of bands all through high school. Finding himself in a starving rock and roll band after high school, when given the opportunity of joining a showband and going on the road, he jumped on it. It was the beginning of a dozen years of playing in a wide variety of bands, ranging from honky tonk bands in bars and casinos to playing show tunes in theaters. He moved to Nashville in 1981, where Andy’s career took on several new dimensions.

One of Andy’s first contacts was the legendary producer/steel guitarist Pete Drake, who helped Andy understand the inner workings of the Nashville studio scene. His first Nashville session was an album for Slim Pickens, an album that had such Nashville greats as Drake, Charlie McCoy, Bob Moore, Pete Wade, Pig Robbins, the Jordanaires…talk about an education!! This led to spending the next 20 years in the Nashville studios, playing on hundreds of records including two that won Grammy awards: BJ Thomas’ “Amazing Grace”, and the Reba McEntire/Linda Davis number one hit “Does He Love You”. Andy plays with the renowned western swing band “The Time Jumpers” as well as with the Lori Mechem Quartet. 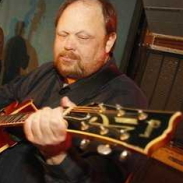