“Who do Miles Davis, John McLaughlin, Herbie Hancock and an extensive list of rock icons have in common? Bill Evans, that’s who.

Evans is a world class saxophonist and producer who made his debut on the international music scene in the 1980’s with Miles Davis (at the age of 21) and recorded 6 records with Davis. This led to touring and recording with the likes of John McLaughlin, Herbie Hancock and Mick Jagger to name a few. Today, with 26 solo albums to date, Grammy nods, and countless collaborations and tours, Evans has continued to explore a dazzling variety of adventurous musical settings as a pioneering bandleader, consistently winning fans in the worldwide arena.

Recent highlights include touring and/or performing with his own Bill Evans Band, Robben Ford (Soulgrass meets Blues), Phil Lesh & Friends, The Mike Stern/Bill Evans Band, Medeski Martin & Wood, and Zen Amadeus – the group Bill and drum icon Simon Phillips put together. There were countless sit-ins with The Allman Brothers Band, Warren Haynes, and a collage of others. Evans spent much of 2016 and 2017 touring the world with the Bill Evans Band in support of his album “Rise Above”.

Bill toured extensively with the Randy Brecker/Bill Evans Soulbop band (formed in 2003) for over 15 years, which incorporated the many influences they both have had in their careers in the Jazz arena. This cooperation produced a live recording called the “Soulbop Band Live“.

Deeply intrigued and ultimately inspired by Jazz, as well as American roots music, Evans wrote, produced and recorded “Soulgrass” in 2005, garnering a Grammy nod in the process. Soulgrass was a breakaway new fusion of jazz and American roots music, blending the banjo, fiddle, mandolin and Dobro, combining the best musicians from Jazz and Americana together. According to Bill “the music and soundscape change, but it’s still me and my saxophone!“ Three more CDs followed in the Soulgrass genre, “The Other Side of Something”, “Dragonfly”, and the 2014 release of “Live in Moscow” recorded during the first of two sold out U.S. State Dept sponsored tours of Russia. Each subsequent release found Bill pushing the musical boundaries of Jazz and Improvisational groove. Says Evans “Miles always told me to write and play what inspires me. I’ve kept true to his advice from the very beginning regardless of the challenges they may create. Miles gave me the confidence to believe in myself as a player and a composer.“

After 10 years of touring and breaking new ground with Soulgrass, in 2015 Bill introduced the “Bill Evans Band”, a hard hitting montage of Contemporary Jazz. The “Bill Evans Band” featured Bill on saxophone/vocals as well as drummer/singer Josh Dion. This band represented a seamless blend of Jazz and groove. Evans was also seen singing on stage for the first time. “People really relate to this band. The Bill Evans Band takes people on a musical journey. For me, that’s the definition of jazz – improvisation and exploration that people can still relate to. It doesn’t have to be mass confusion. I like to connect with the audience and inspire people with new kinds of music you can feel as well as hear.”

“RISE ABOVE” was Bills 2016 release, and his most accessible release to date. On this, his 24th solo offering, Evans explores rich and haunting vocals from special guest singers, including legend Gregg Allman, Warren Haynes, JJ Grey, Anders Osborne, Murali Coryell, and Josh Dion. Says Bill, “This recording was an epic journey for me. My vision from the beginning was to record with some of my favorite singers, and co-write music  with each one of them. The goal was to still make a cohesive and solid performance out of all this music. It went far beyond my expectations. A sheer pleasure from start to finish!” 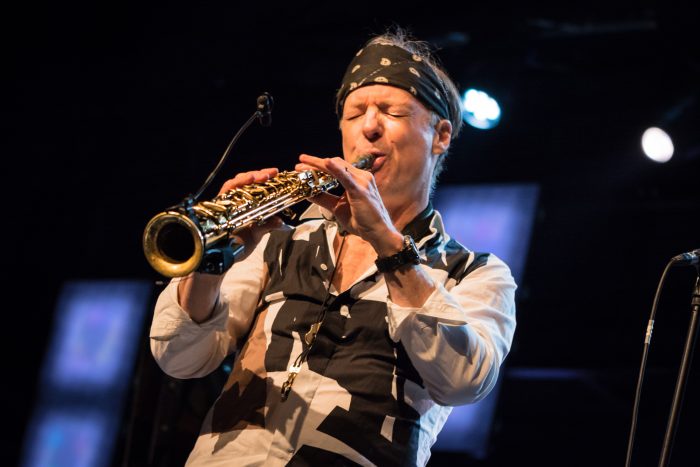