Kenny Malone has been swept away by music since he was 5 years old. He served in the U.S. Navy for 14 years, during which time he played in the Navy Band in Washington D.C., and served as head of the percussion dept. at the School of Music for Navy, Army, and Marines. He has played every genre of music and is recognized as an extremely musical and inventive player, often known to find objects lying around the studio to create a sound suitable for the track at hand. For this reason such Grammy winners as BÌÄå©la Fleck, John Prine, Edgar Meyer, Lyle Lovett, Emmylou Harris, Nanci Griffith, Alison Krauss, Kathy Mattea and The Chieftains have called upon MaloneÌ¢âÂã¢s services in addition to the more mainstream artists such as: Don Williams, Dobie Gray, George Jones, Waylon Jennings, Johnny Cash, Ray Charles, Merle Haggard, Dolly Parton, Crystal Gayle, Reba McEntire, Kenny Rogers, and Garth Brooks, making him one of NashvilleÌ¢âÂã¢s top session players. 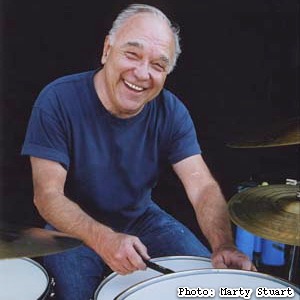