Mel Deal has over forty years experience as a professional instrumentalist and has worked in venues ranging from solo jazz guitar to The Nashville Symphony Orchestra. Because of his versatility, he has also performed with many pop and country music stars.

In addition to a playing career, he is part of the faculty at The Nashville Jazz Workshop. He has taught jazz guitar clinics at The University Of N. Alabama, Hume Fogg and Battleground Academy, and has been a guitar instructor at Montgomery Bell Academy for fifteen years.

As an instrumentalist, he has performed with the Nashville Symphony, The Nashville Opera Co., The Huntsville Symphony Orchestra, The Nashville Chamber Orchestra, The Birmingham Symphony, Midland/Odessa Texas Symphony, and The Germantown Chamber Orchestra in Memphis, TN. These venues have ranged from classical and opera to off Broadway productions and pops concerts, including performances with: Michael Feinstein, Melba Moore, Lorna Luft, Idina Menzel, Rita Coolidge, and Jimmy Webb. Recorded works with the Nashville Symphony include: Rhapsody in Blue, West Side Story, and Porgy and Bess. Jazz artists with whom he has performed include: Ricky Woodard, Gatemouth Brown, Groove Holmes, Gene Bertoncini, Jack Wilkins, Mark Feldman, Paul McCandless, and Mundell Lowe. He has studied privately with jazz guitar greats Jimmy Raney and Pat Martino. 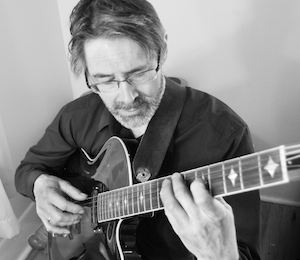