This page was created in honor of the Nashville Jazz Orchestra, a fellow nonprofit organization since 1995. The Nashville Jazz Orchestra was founded by trumpeter and arranger Jim Williamson and for many years was one of the city’s only big bands. Besides being a superb arranger and bandleader, Jim was enterprising in finding venues for the large ensemble. For several years the orchestra was in residence at Vanderbilt’s Blair School of Music and after that at the City Winery. Sadly, Jim passed away in 2020. The orchestra now continues under the leadership of Ted Wilson. The following is a part of their story.

It must be that every city wants a symphony, a chamber orchestra, a ballet, an opera, and a jazz orchestra… otherwise there wouldn’t be so many attempts at forming these musical treasures.

Jazz orchestras (big bands), over the years, have met varying degrees of success. Many that are successful today have incorporated into non- profit organizations. That seems to open doors and is a first step in creating a lifesaving niche for the band. Even the Village Vanguard Band, formerly the Mel Lewis Band, formerly the Thad Jones-Mel Lewis Band, finally incorporated to stay afloat. If a band of international names centered in a club in Greenwich Village, the hottest neighborhood of jazz on the planet, can’t make it on reputation alone, then drastic measures are required.

With a mission statement that could be summed up in two words, “perpetuate jazz,” the Nashville Jazz Orchestra began playing concerts at schools, parks, festivals, clubs and theatres. For a number of years, NJO made steady progress but a slowing economy, scheduling conflicts and lack of an organized community jazz support group caused the band to go inactive for two years.

In February 2003, I called sixteen of the top session player in town I knew to have a passion for big band jazz, performance level sight-reading skills and the ability to swing. I asked the guys if they would like to get together on a Wednesday night at the Nashville Jazz Workshop to read some music that I had recently acquired. The arrangements were challenging, musical, hard swinging and extremely fun to play. At the end of the night, we scheduled a second session. Guys in the band began to bring in more music and in March 2003, a Wednesday night reading band was born. 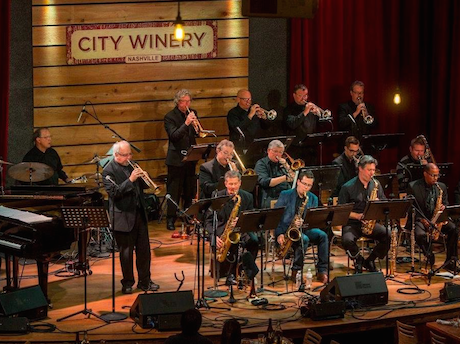