TIERNEY SUTTON
A 9-time Grammy nominee, Tierney Sutton has received a “Best Jazz Vocal Album” Grammy nomination for every project she has released in the last 15 years. Known for her impeccable voice and superbly imaginative arrangements, Sutton is heralded for her abilities as both a storyteller and her ability to make even the most familiar song a revelation.
Since 1993 Sutton has fronted “The Tierney Sutton Band” (TSB) which features instrumental virtuosos Christian Jacob, Trey Henry, Kevin Axt and Ray Brinker. On stage as well as on recordings, the band exhibits an “almost  unearthly” connection, a tribute to having the same world-class personnel for over 25 years—a virtually unheard-of accomplishment in today’s music business. Incorporated partners, all decisions, musical or business are made by the band as a unit. In 2011 they received a Grammy nomination for their collaborative arranging, the only band ever to receive this honor.
In addition to her discography with the TSB, Tierney has enjoyed recording collaborations with other music luminaries. Her 2013 Joni Mitchell tribute, “After Blue” featured keyboardist Larry Goldings, drummer Peter Erskine,  jazz vocal legend Al Jarreau, The Turtle Island Qt, and NEA Jazz Master Hubert Laws.
In May 2016 Tierney was approached by legendary Director Clint Eastwood who has described Sutton as “my favorite living jazz singer”. The original score to his box-office smash, “Sully”, was created by  TSB pianist, Christian Jacob, The Tierney Sutton Band and Clint Eastwood. The end-title song “Flying Home” features music by Eastwood and lyrics by Tierney Sutton and JB Eckl.
When she is not performing, Tierney is in demand as both a studio vocal producer and vocal educator. She taught for over a decade at USC’s Thornton School of Music and has also been a faculty member at  The Jacobs school of Music at Indiana University, and The Los Angeles College of Music in Pasadena, CA.  Tierney has taught and mentored some of the finest new generation of singers including Sara Gazarek, Gretchen Parlato and Kathleen Grace.
twitter: @tierneysutton                                  Instagram: tierneysutton_music
www.tierneysutton.com 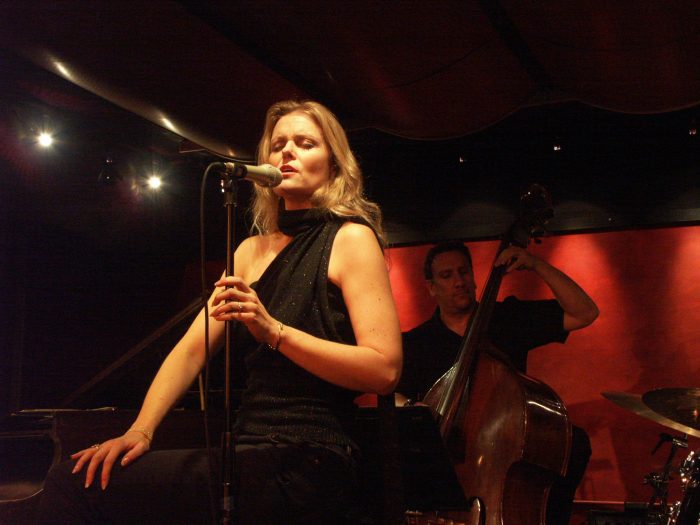